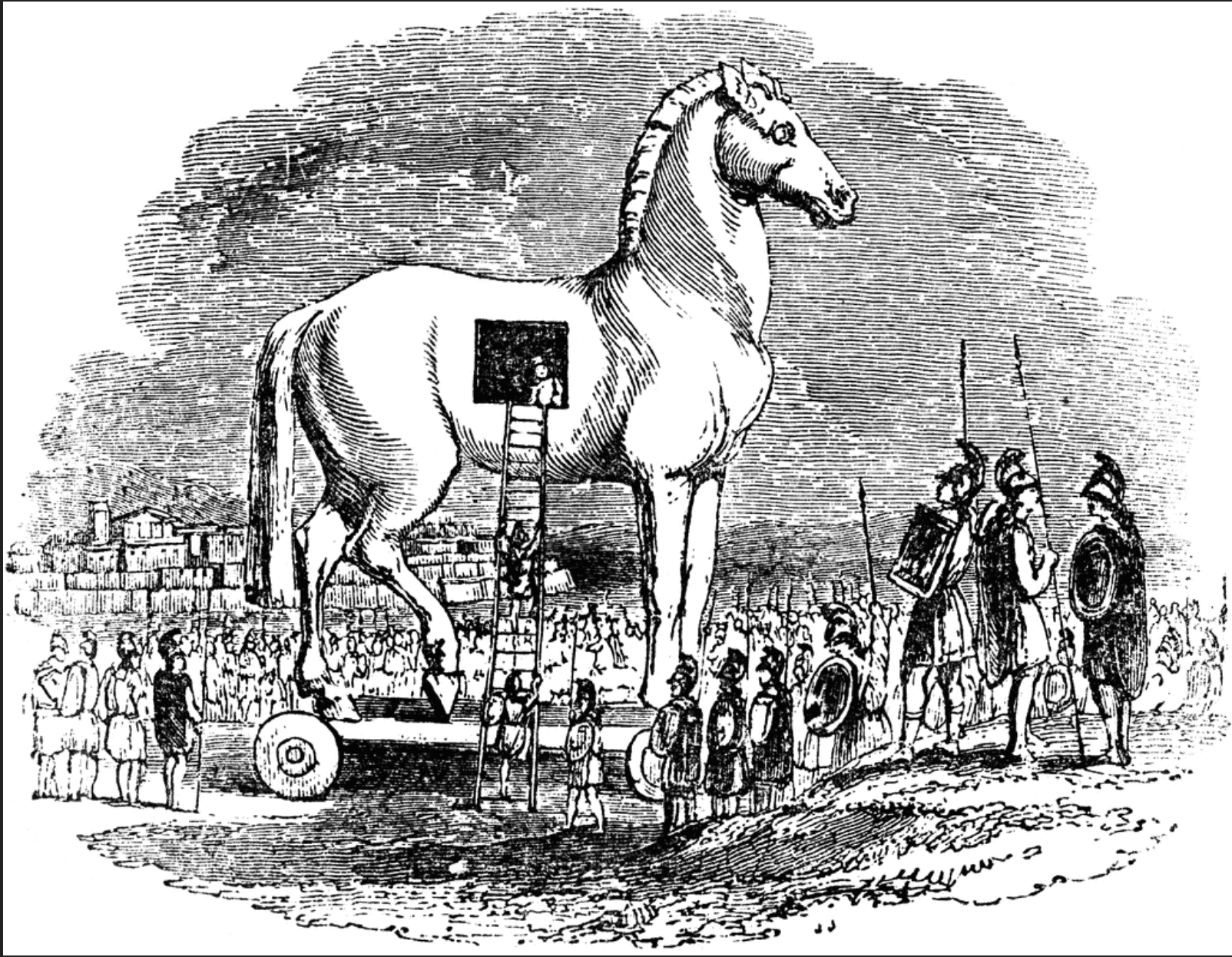 Most definitely not the Oracle EPM product management and development teams. Maybe.

Don’t believe me? This post is but the first of a multipart series on Free Form Planning as I make my case for FFP (I am so over writing the full name, cf. my well-known laziness and also remember this is really Essbase).

Before I document this first pass at creating an Essbase SaaS aka FFP application, I should note that the below is not the only way to create an application and it has twists and turns. As noted, this will be a series of posts on how this works.

With that, let’s create the app.

Essbase SaaS is after all a cloud product and an Oracle one at that. It is thus not surprising that we start with the normal Oracle cloud login.

First into the domain 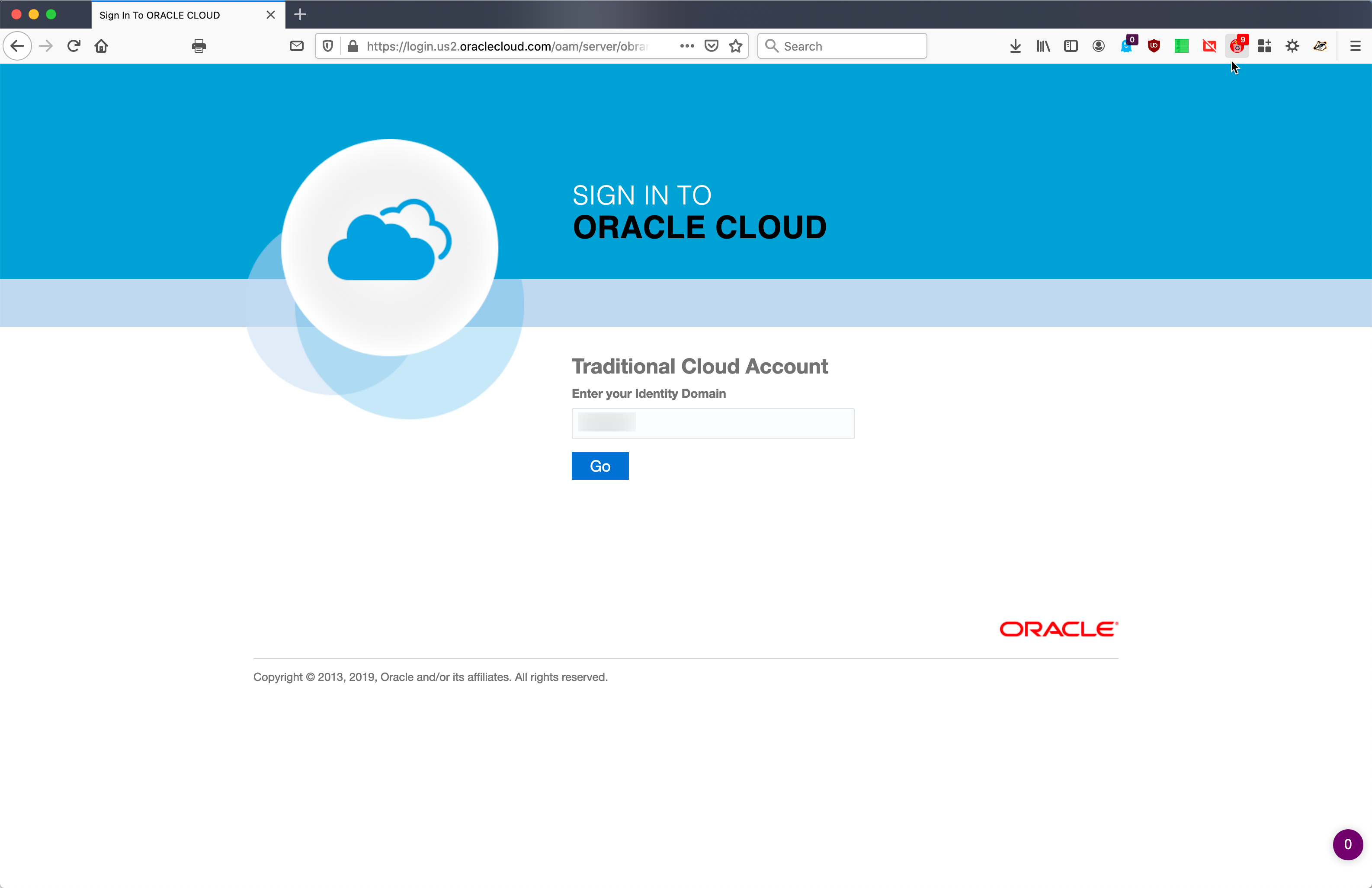 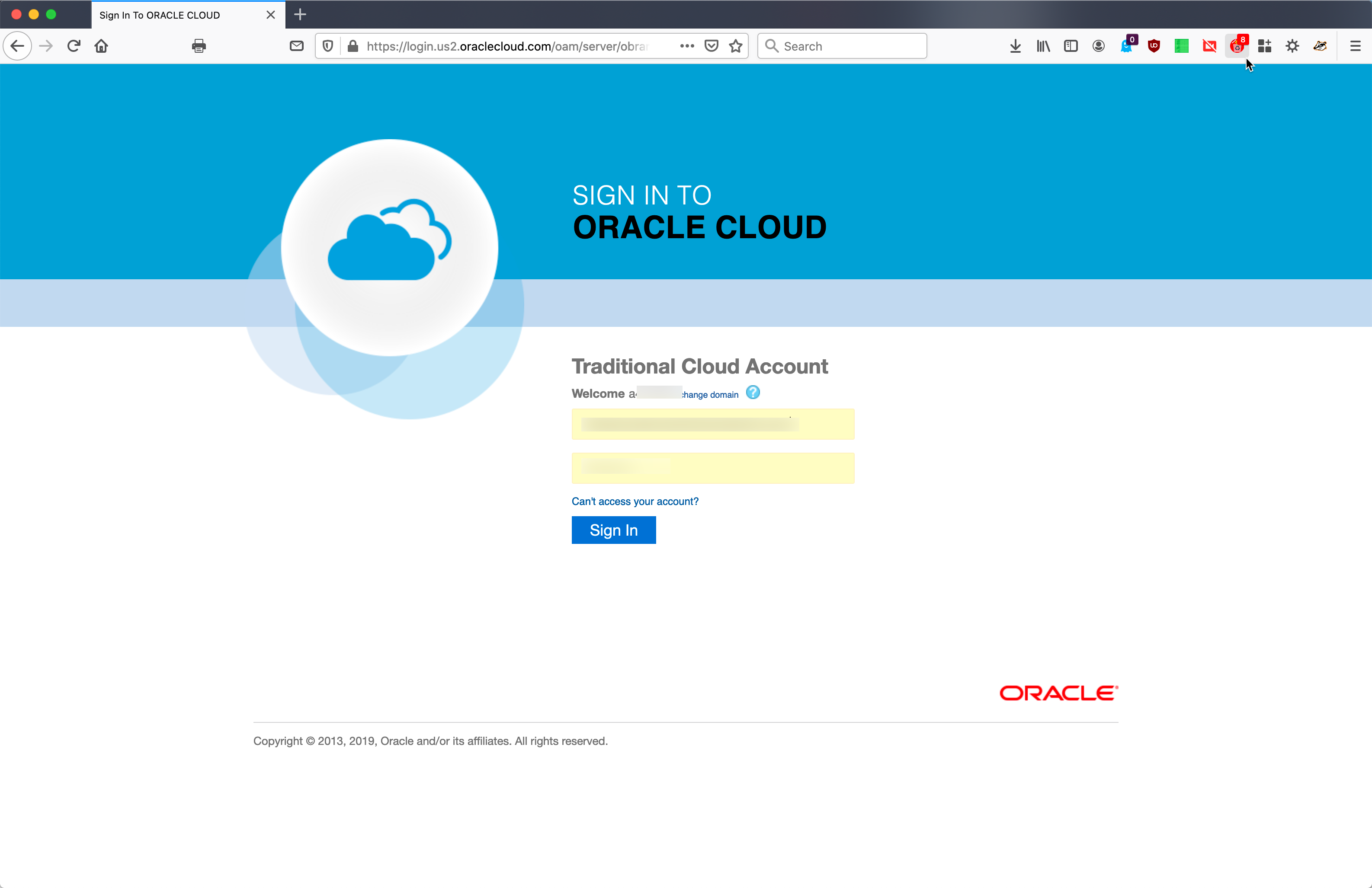 And we are faced with a pretty simple choice. That’s good, as Yr. Obt. Svt. is nothing if not simple-minded.

Oooh, look at all of those beautiful application types. 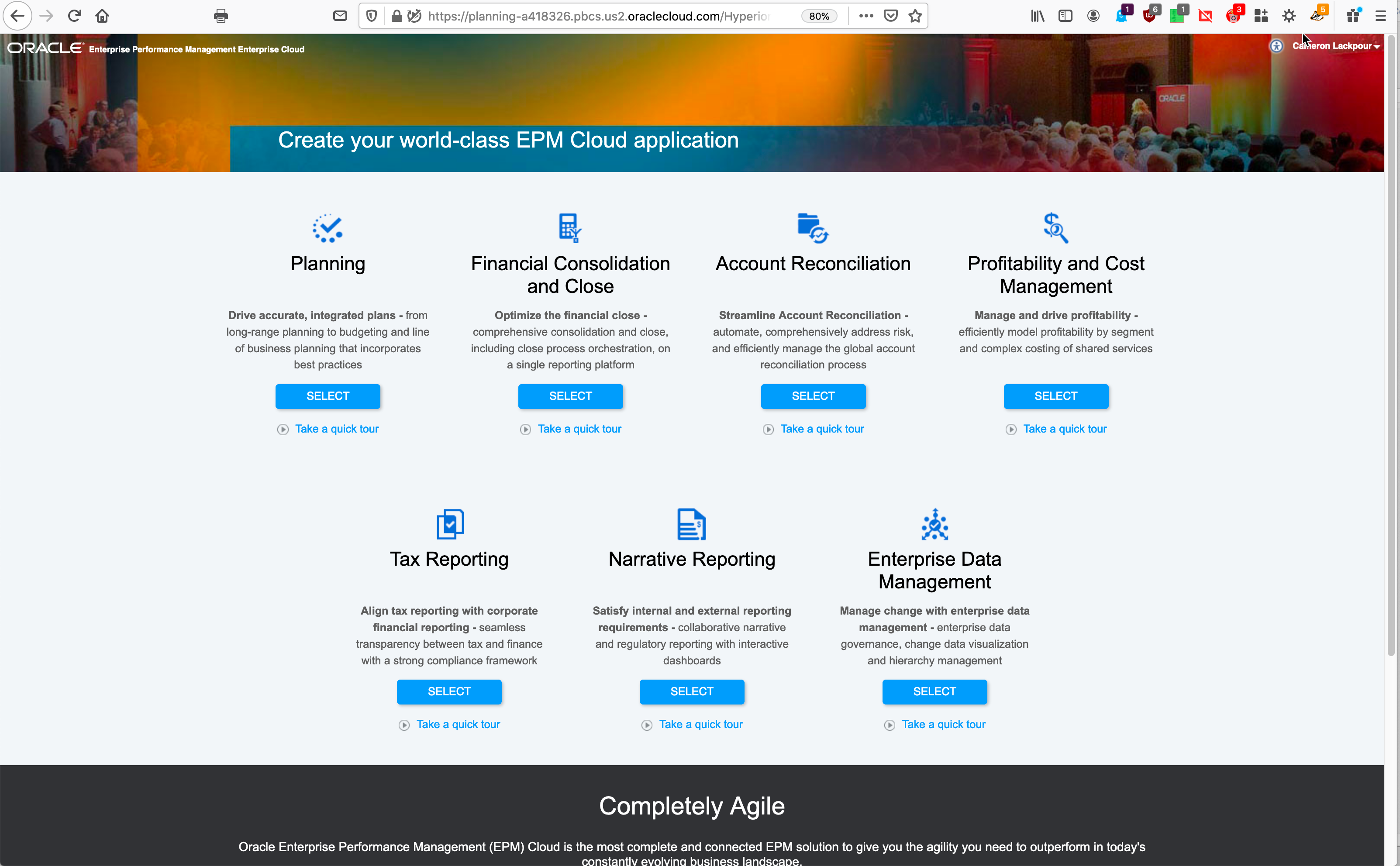 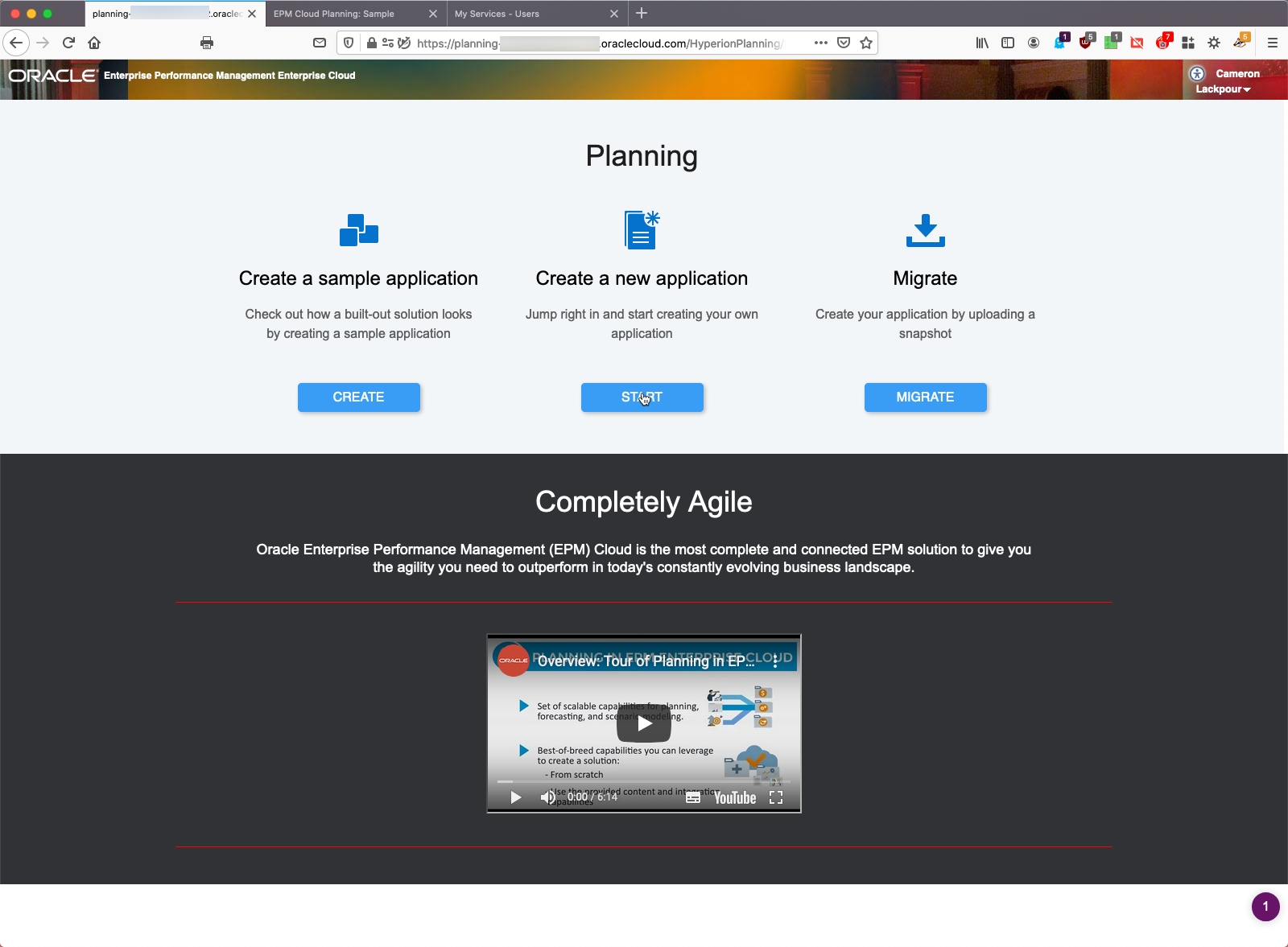 I’ve got naught to migrate and of course I’m too lazy to review the sample application although, heh, I am hell-bent on installing a Sample of some kind or another so I shall go on my merry blogging way and create new Planning application.

In addition to laziness/time pressure/I actually do enjoy a challenge – I think really a part of it is laziness but also a fair amount of ego and really and truly mostly ignorance (those who professionally know me know all too well these personality traits) – and so I’m not going to read the docs.

Let’s take a walk around the block

Hah! You knew I wasn’t going to create a Custom (PBCS) or Modules (EPBCS) app, yes? Let’s go create that Free Form Planning aka Essbase SaaS application. It’s going to shock you how easy it is. Seriously, easy peasy no big deasy.

One big caveat: you get one and only one Essbase database per Essbase SaaS instance. If you are converting an ASO application, that is no issue as it’s one database per application. However, if you are the sort that likes to stick 12 (yes, I think I’ve seen this and no I don’t know why it was done this way and yes, absolutely, it’s kind of a dumb idea) BSO databases under a single application, then I’m afraid you’re going to have to cut your coat according to your cloth.

I understand – and this is under full Safe Harbor (aka what I write might be partially true or partially false, but it equally may not be true, or in fact it may be 100% correct but no one can really tell one way or the other and if any of it is true, who knows when it might happen. You Have Been Warned.) that this will be addressed at some time in the future. Maybe. Or not.

One last thing to note: if you despair and really and truly do need another or a dozen BSO databases and your company is an Enterprise EPM customer (and you will be if you’re going down the Essbase SaaS path), you simply request another zero cost Essbase SaaS instance and you’re off to the races. Nice, eh?

With that, I shall create Sample.Basic. Or at least I’ll try.

When will Oracle listen to me and rename this to what it really is: Essbase SaaS? Probably the 32nd day of never but of course a man’s reach must exceed his grasp, or what’s a heaven for? 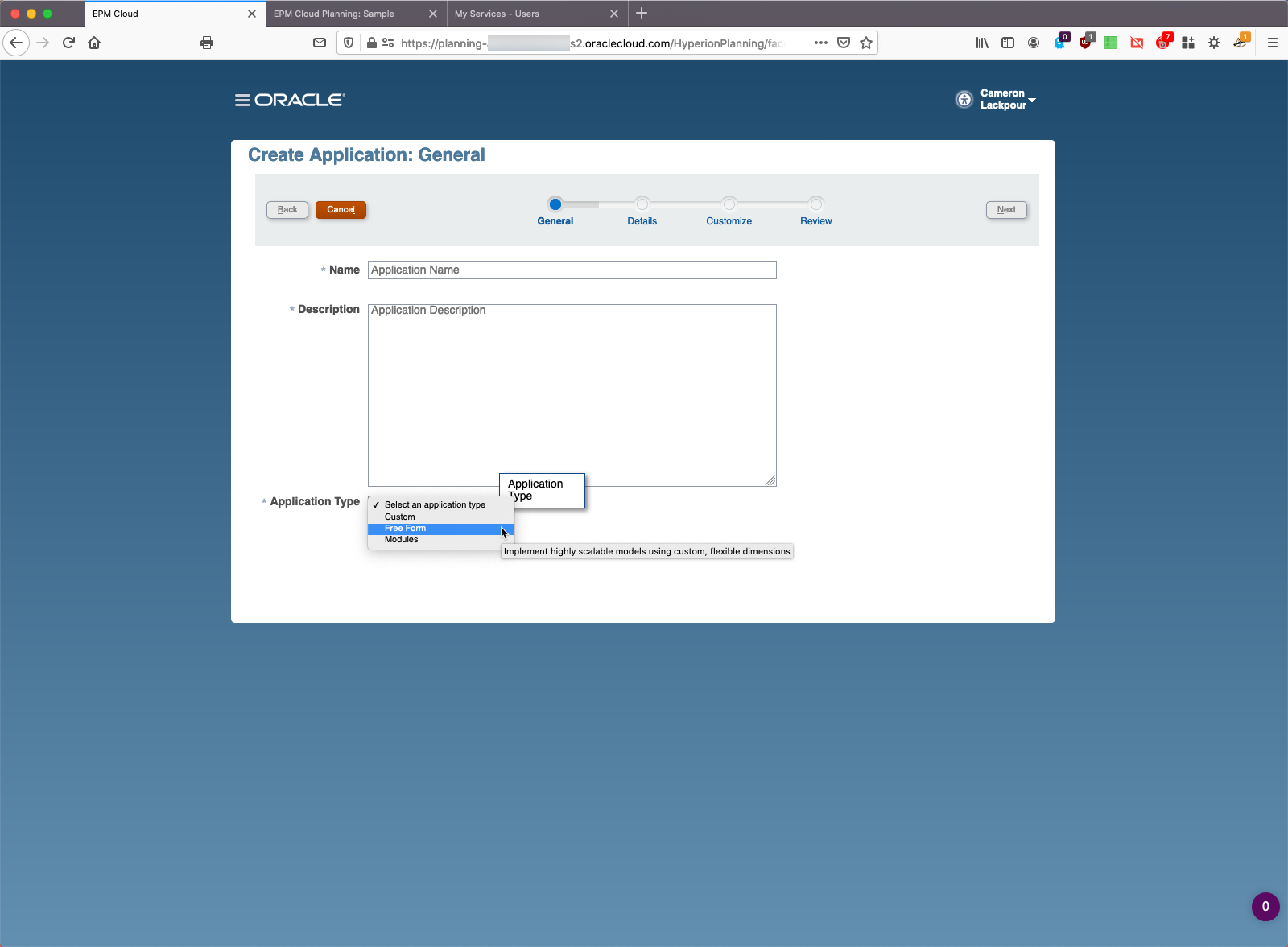 Initially, I’ll pick the .otl file; later in this post I’ll show the LCM approach. I have no idea what Planning (BSO/Hybrid) nor Create Reporting Cube does but I did note that this is a series on Essbase SaaS and I’ll review what they do in a later post. 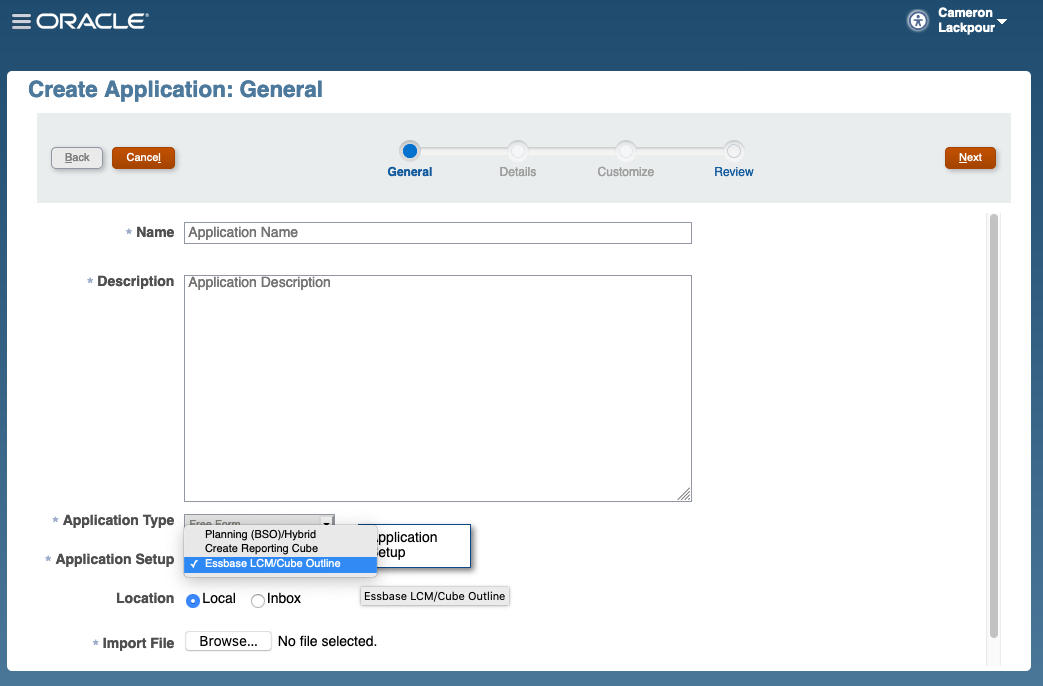 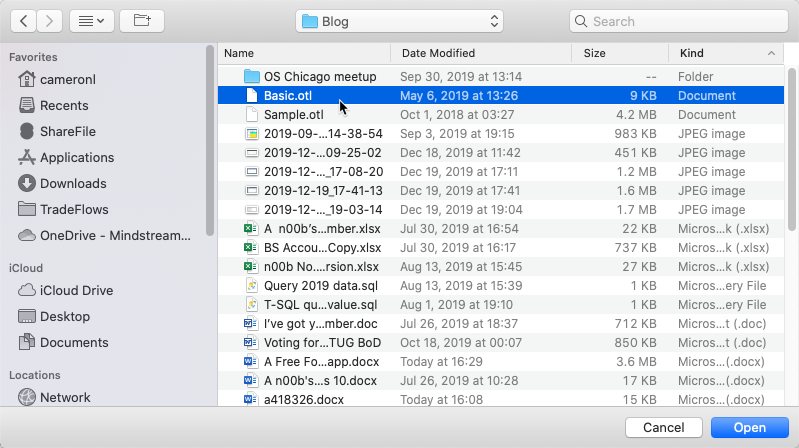 Let’s give Essbase (Ahem, note the lack of the word “Planning” in this description – sorry for the confusion but this is less confusing, somehow. You’ll thank me later.) a whirl: 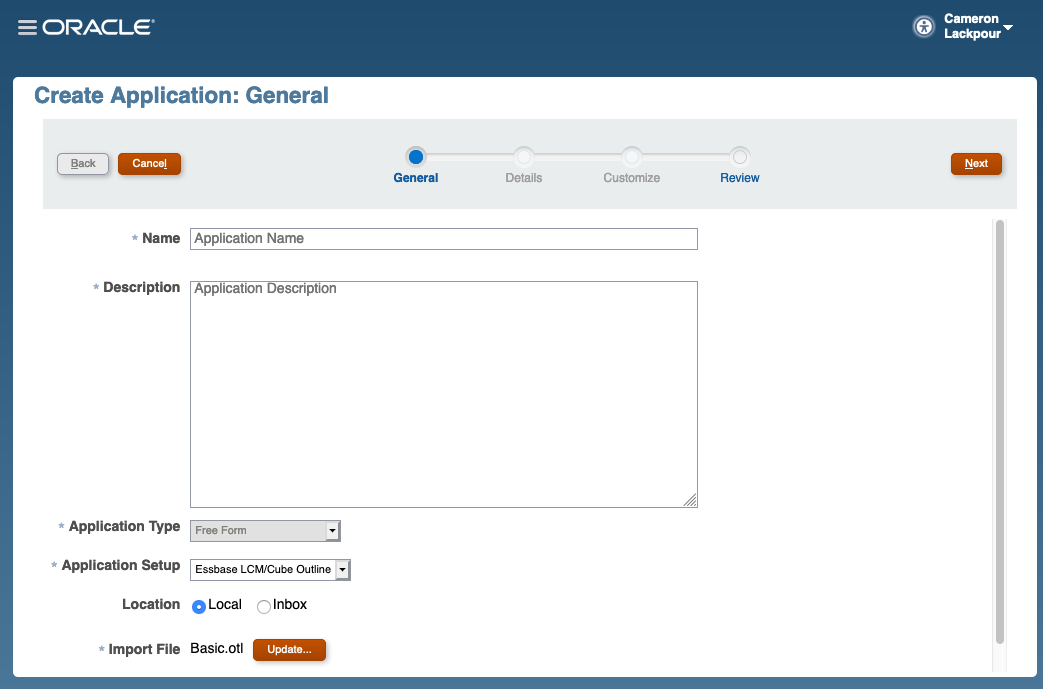 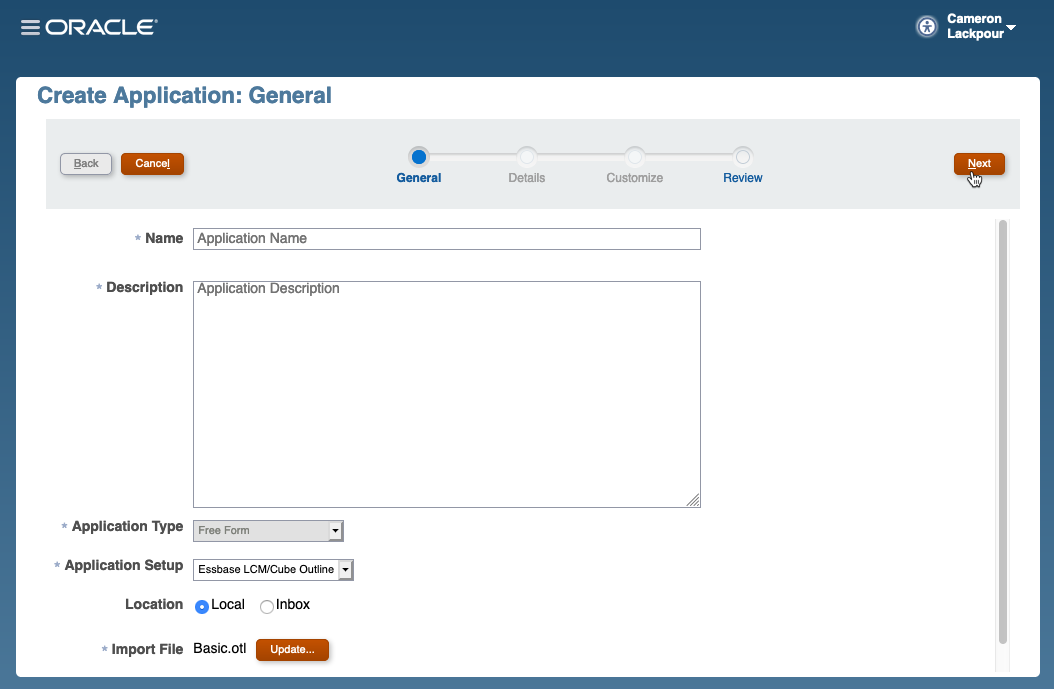 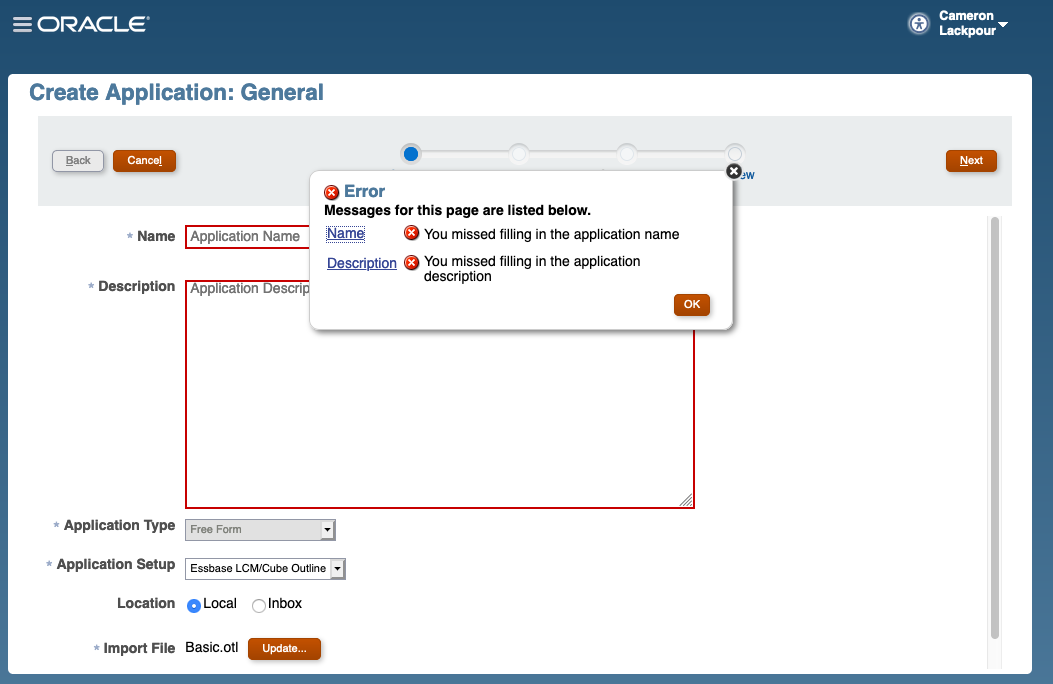 Oh yeah, forgot to name it. Whoopsie. And yes, you really and truly do need to give the app a description. Whoopsie, again. 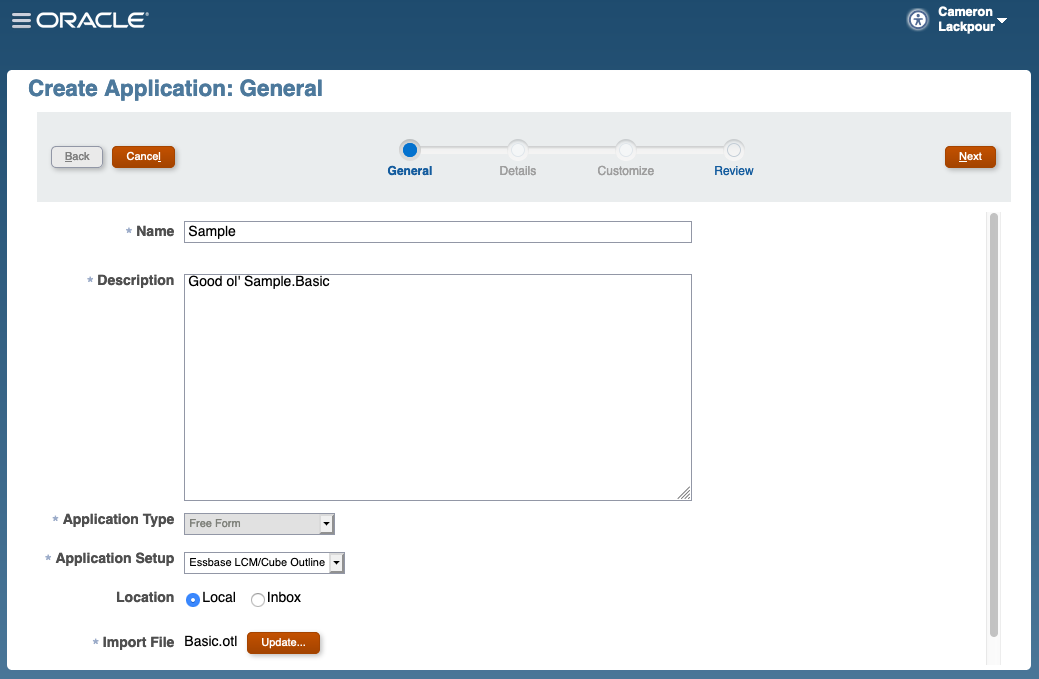 Another whoopsie, this time on Oracle’s part (Did you really expect a Geek’s Essbase SaaS panegyric? If I praised absolutely everything, would anyone believe me? I wouldn’t.): the application name is eight characters long and no more. Eeek. Chaps, it’s no longer the world of DOS 1.0 or even 7.0. Of course, I might note that this is also the limit of Essbase non-unicode applications and this is Essbase so…

Here’s my last chance to back out. As if. 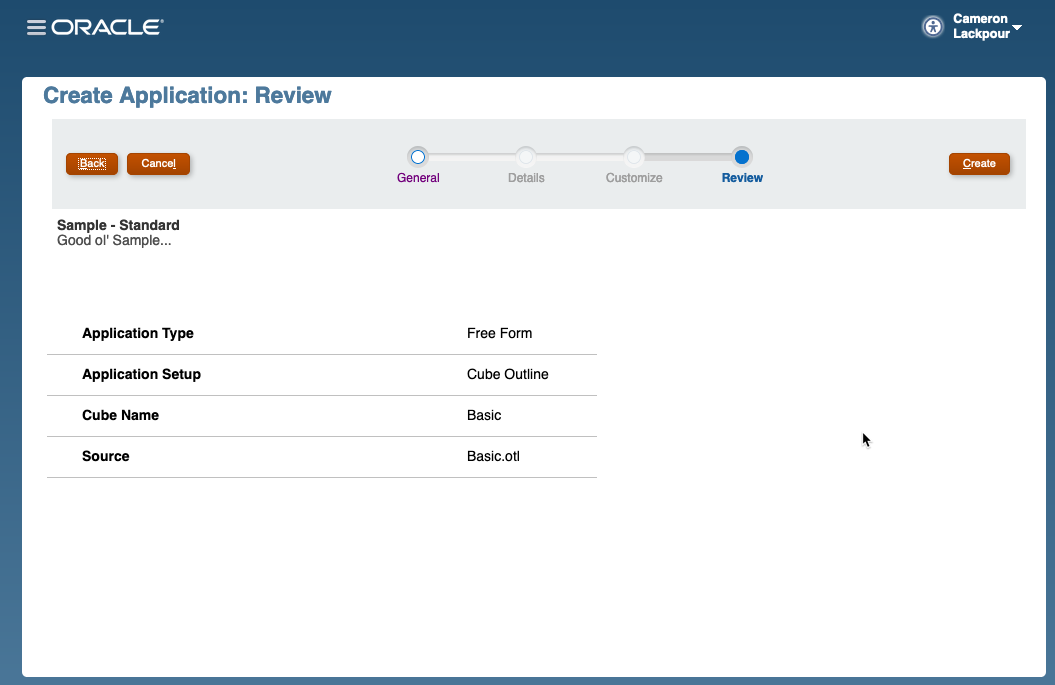 Whirr and grind away 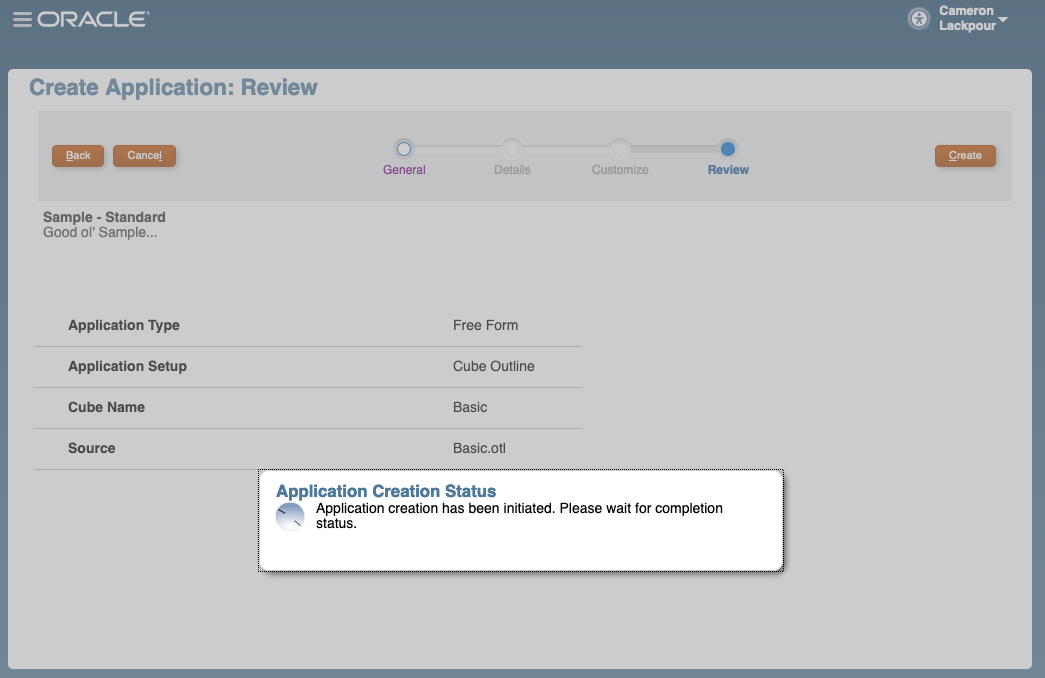 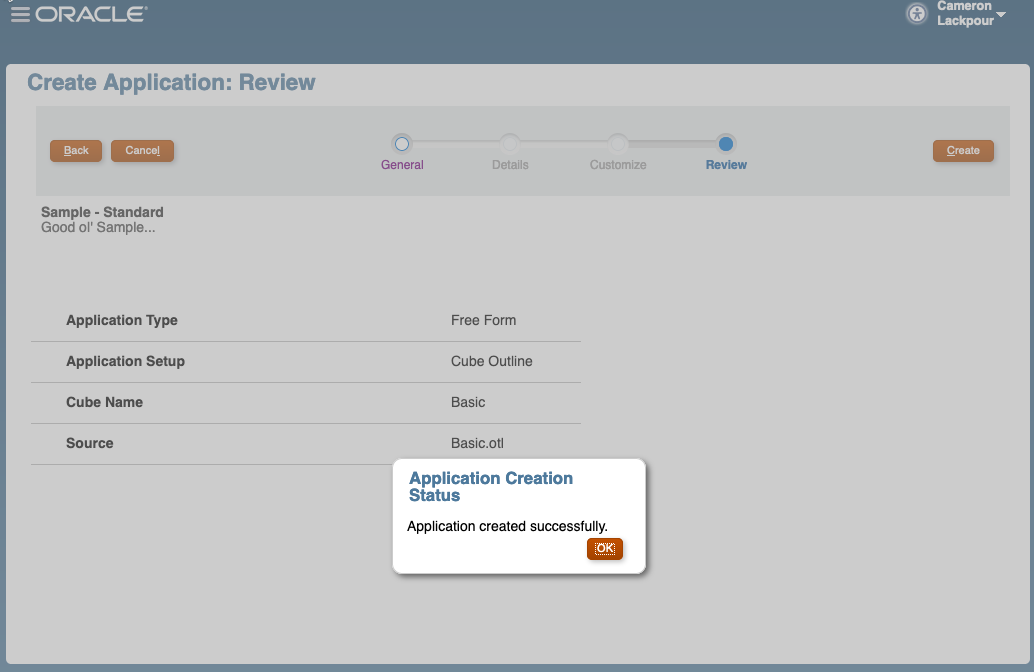 Btw, are you groking how stupidly easy this is? I mean seriously – I point to an .otl file, give the app a name and a description, I click on Next, and…it’s done.

What did Essbase SaaS do? 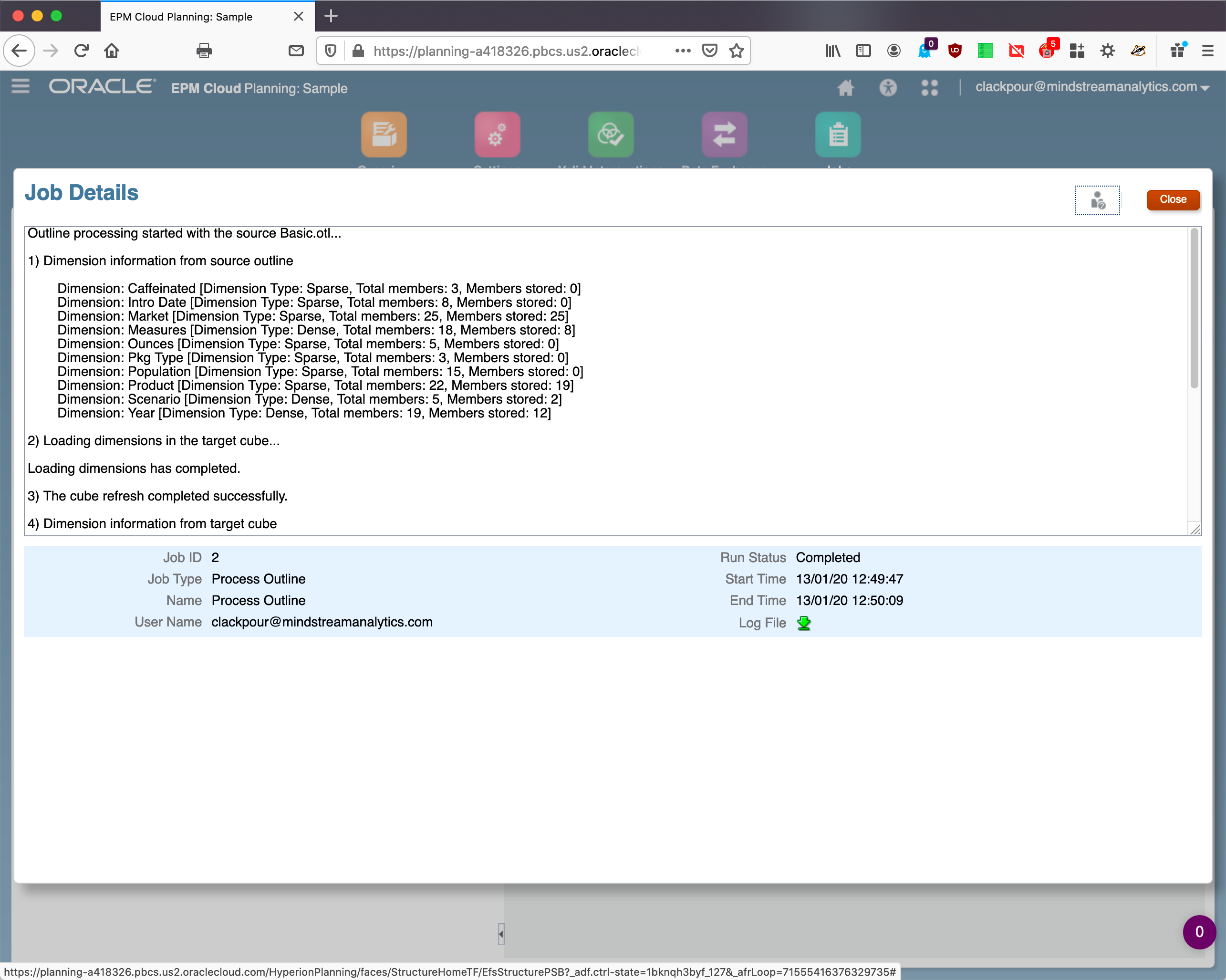 Going to the UI, it sure does look like E/PBCS. That ain’t Essbase. 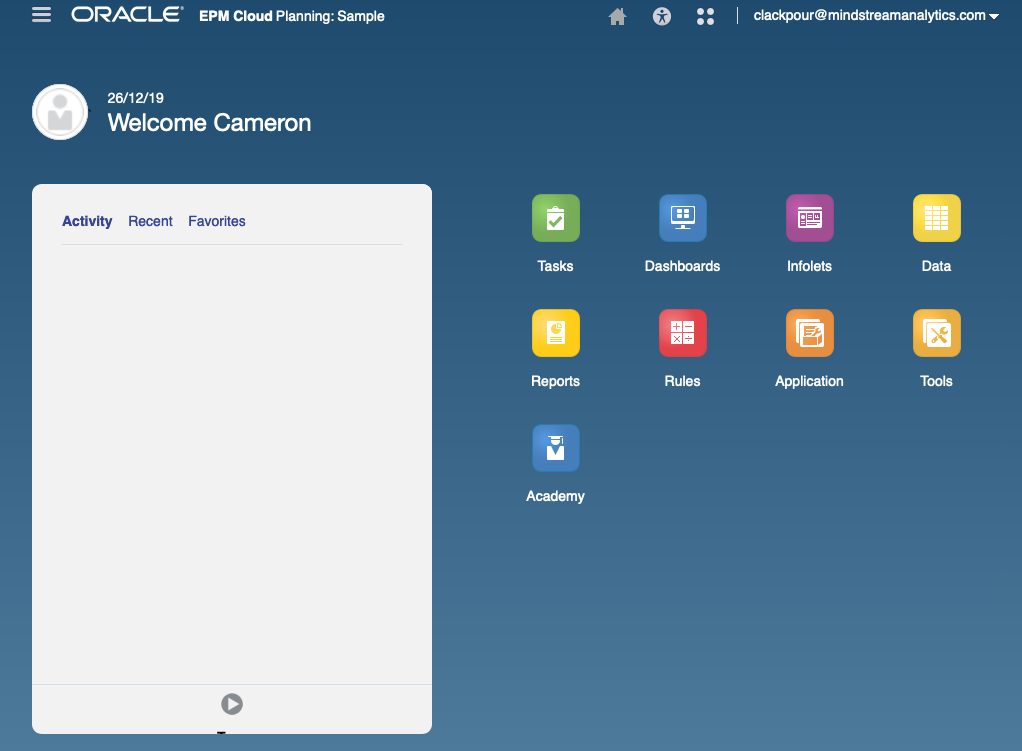 What ho? It is Essbase’s Good Ol’ Sample Basic, ‘cos here are the dimensions in all of their glory.

Here are the dimensions you know and love: Accounts (in Sample.Basic’s case, that’s Measures) Entity (I think that’s Market), Version (not there and not required), Scenario, and oh yeah, Time (aka Year).

BegBalance? Hmm, maybe this is more like Planning Cloud’s Time than I realized. Also, fiscal year of 2002? Where did that come from. And YearTotal as not the parent? Easy to fix.

It is, btw, my COMPLETELY SAFE HARBORED and also COMPLETELY IIL FOUNDED and quite probably INCORRECT expectation that BegBalance will go away. Maybe. Probably. It should.

It is, also btw, nice to see that Oracle has started the Fiscal Year in 2002, totes obvs and are thus paying homage to the year of my first Planning project (gasp, yes, 18 years ago) and – and this is the coolest part –the development team is a huge fan of what was the most brilliant sports car of the 1970s: 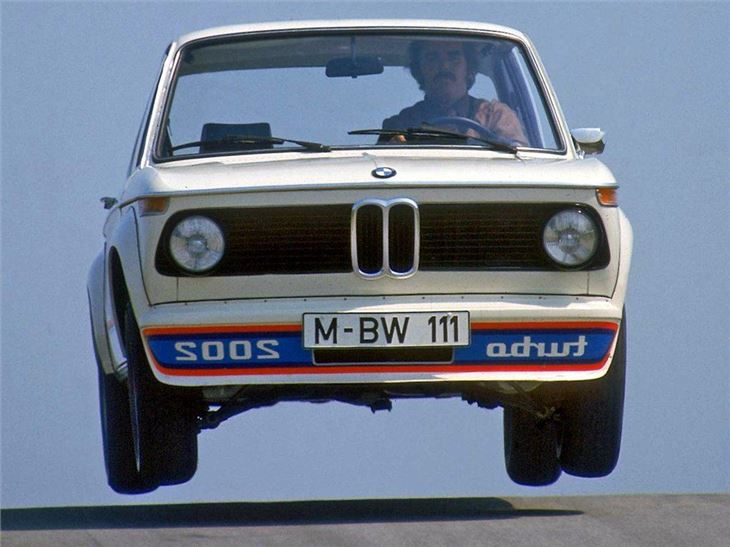 For those of you who are not aware of the reverse typeface joke, envision one of these rapidly closing on you in the rearview mirror as you tootle down the autobahn between Friesing and Landshut at 160 kph (I did this, in a balls out 1990 diesel Ford Orion, — the fastest I’ve driven, legally). Pretty cool, eh?

For those of you who are not car geeks who regularly peruse what is surely the best classic car magazine of all time, here’s the rear view. Now do you get it? Good. 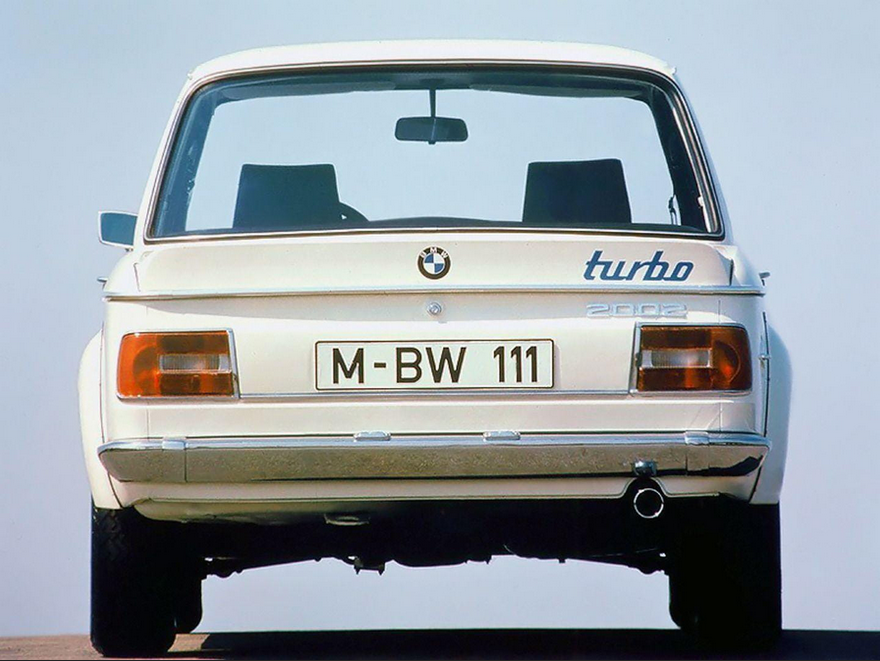 Did the migration work then in other areas?

That’s lovely. Let’s take a look at a member formula. 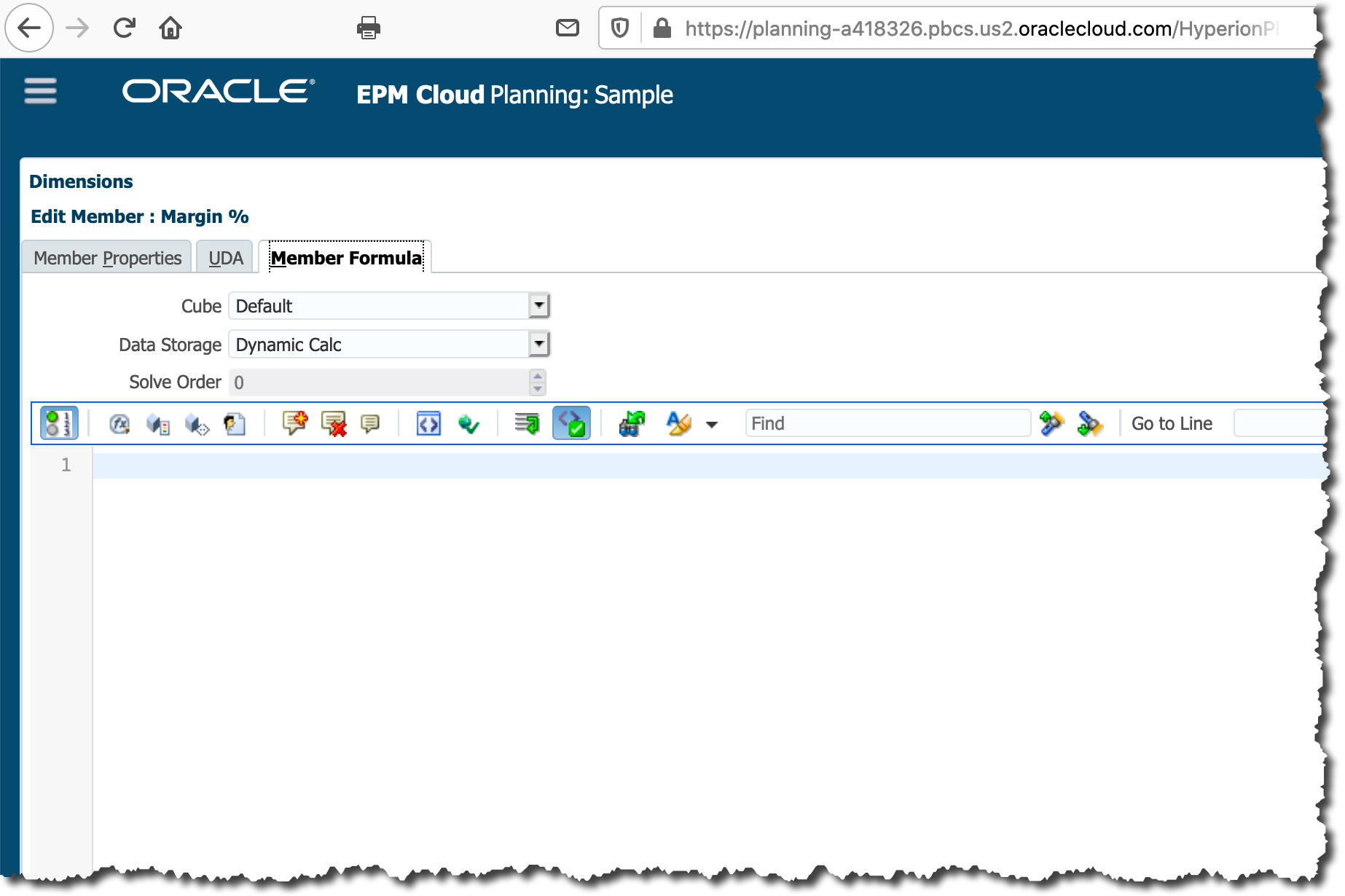 That’s a bit of a problem as when I look at my ancient 11.1.2.4 Essbase on-premises instance, I see:

Formulas in traditional Essbase but not in Essbase SaaS? Nothing? That’s useless.

Orrrrrr….I could be an even bigger idiot that I (and oh so many others and likely for the best of reasons) think I am. Cameron, did you click on that all-important dropdown menu to flip from Default to Basic? Did you? Did you? Thought not.

And here we are:

Ah, I see both the members as well as their attributes:

And here we are again:

If I look at an individual member:

Just as one would expect.

Are you bored yet? Everything’s coming across, just as it should.

That’s it, the whole outline, dimension for dimension, member for member. Brilliant.

Let’s try this a different way

An .otl file is all very well, but what about our beloved Shared Services LCM format? Let’s give that a whirl.

Assuming I’ve extracted the Sample application out to a zip file, let’s import it into Essbase SaaS: 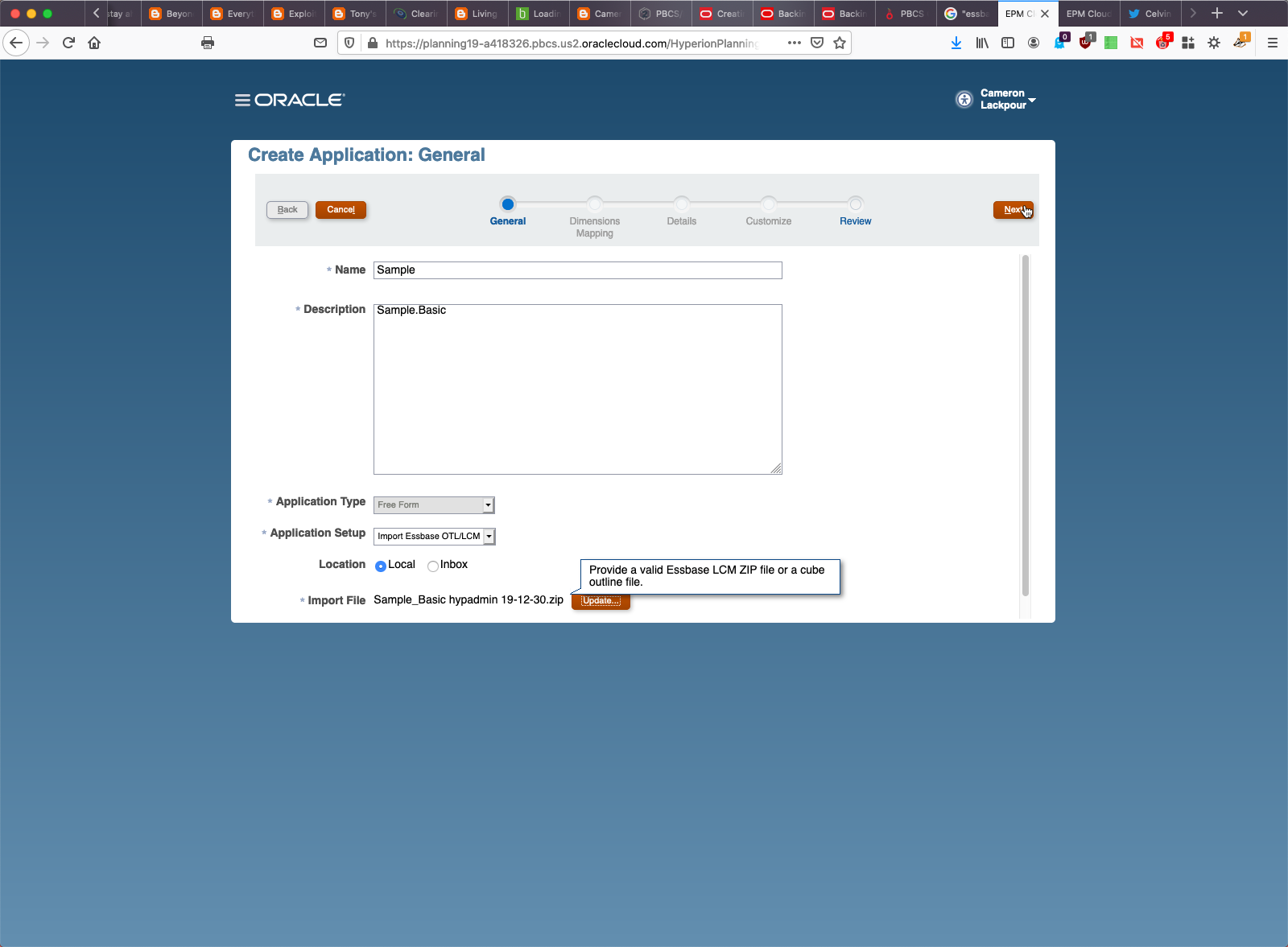 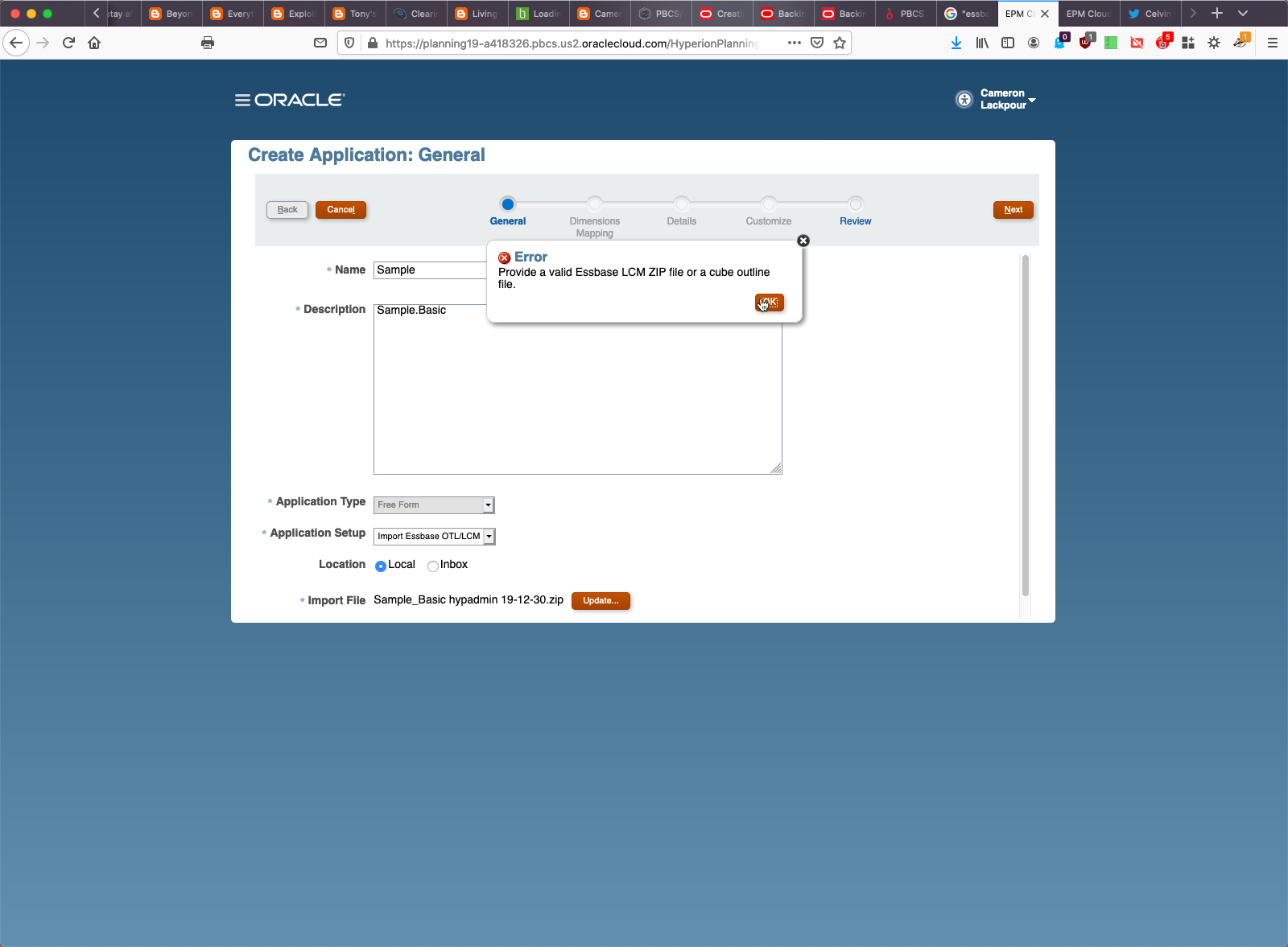 But why? Three databases in the Sample application is why. 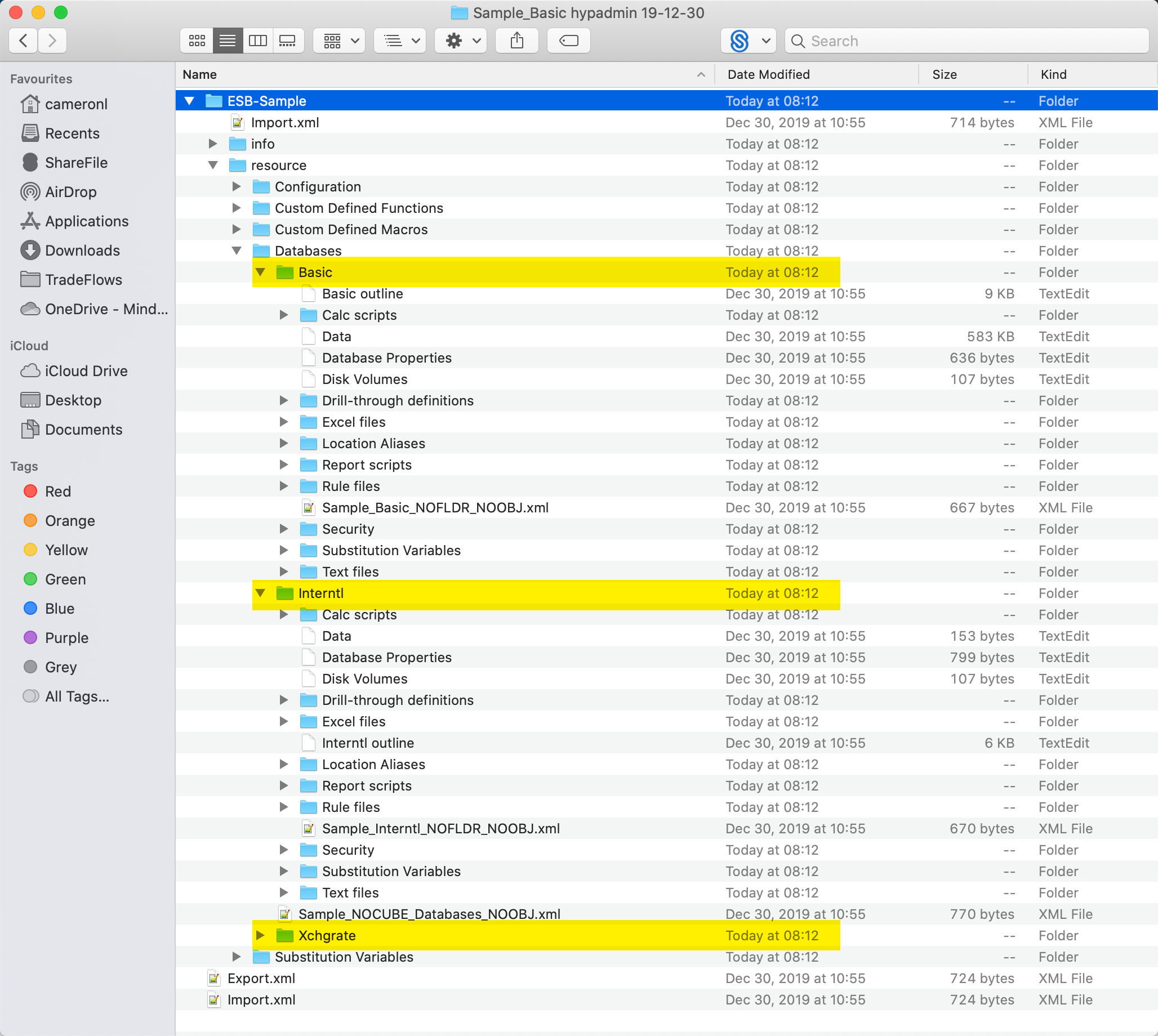 Remember, at as of the writing of this blog post, only one database per application is supported.

Does this mean LCM as an import medium is broken? Nope, just make sure to export just that one BSO (remember, ASO is supported as well and that database type quite happily only has one database) database no matter how many the application may have: 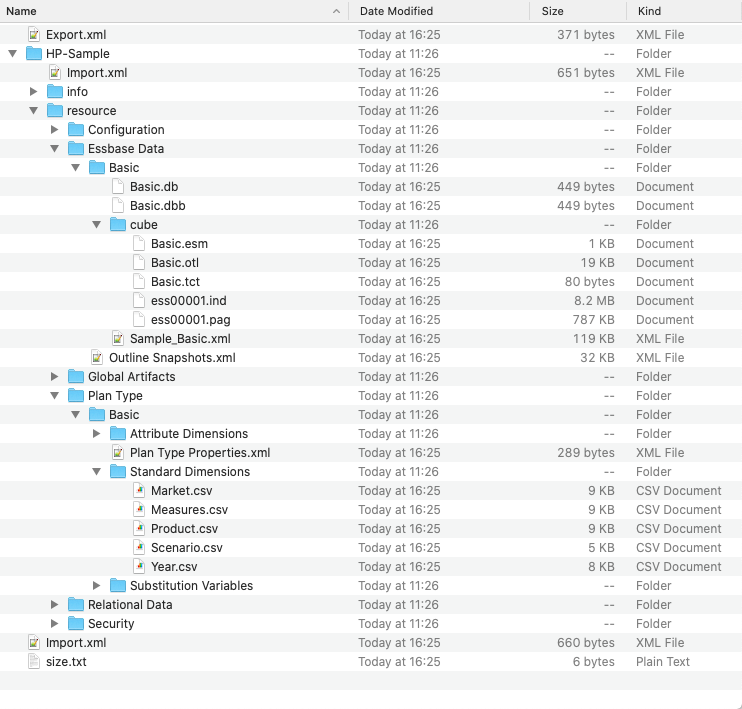 Note that there’s all sorts of information here beyond the outline and as far as I can suss out, it isn’t imported: only the outline itself is brought across. You, Gentle Reader, will have to decide if a clean slate is a good thing or not. I’m personally in the former camp – a chance to review why something is done and how it’s done is never a wasted opportunity.

What, 23 pages in Word isn’t enough content for a single blog post? That I did (well, as I always have) for free? Tough crowd.

Seriously, I have to get this post out before the end of time, so I’m stopping here.

What I can promise is a continuation of this series (heh, a series sure does suggest more than one of whatever) where I bring we Essbase Hackers up to speed with Essbase SaaS. I am, in case you’ve missed it, incredibly excited about this. We now have Essbase, in the cloud, as a SaaS. Exciting times.

3 thoughts on “A Free Form Planning aka Essbase SaaS — part 1, creating an app”