Pretty much every teacher I tortured with my intransigence and folly gladly received tutelage from as a wee lad noted that while I had a certain level of base intelligence, (note that I didn’t use words like, “overmuch”, “gratifyingly high”, or even just, “barely adequate for the purpose at hand”) I really, really, really wasn’t terribly good at following instructions. It’s a skill that alas seems to be forever beyond my reach. And still is, as you’ll soon see.

Tim Hall, aka OracleBase, (Oracle-Base? Dunno.) organizes OGB (Oracle Groundbreakers) Appreciation Day as a way to thank all of the people in the Oracle community that have helped others. In my (OMG, surely it isn’t possible if you follow the corporate ownership path of Essbase) 25 years in the Oracle space I have: helped some, been helped by many, and confounded and confused just about everyone I’ve crossed paths with.

Hah! I’m going to write about all of them. Double Hah! Some will be nice, some will be painful, most will be the truth (no naming and shaming of the guilty unless it’s me).

Oh, the irony as I’ve argued so long against it: Groovy in Planning. I’m on a project right now that breaks Essbase/Planning like a 14 lb sledgehammer against one’s ankle and it’s all thanks to Groovy.  Wrong again.

So many, so many. But I have at least learnt to not repeat those mistakes. Happily, there are plenty of others.

Specificially, my biggest OMG moment was on my first Planning project in 2002. This was in the days of Essbase Application Manager and a truly dreadful Hyperion Desktop as the admin interface. Of course I was Too Smart to use that buggy piece of junk and would instead cleverly use App Man to do all things Essbase.

If you look at the UI of App Man, there is no treeview to the left of the outline editor. It’s been ages since I’ve connected via the tool’s (I have the binaries somewhere but not here at the airport where I write to you this deathless prose) File menu. And in that File menu laid my despair and ultimate demise.

Have a looky-loo at the greyed-out Delete. 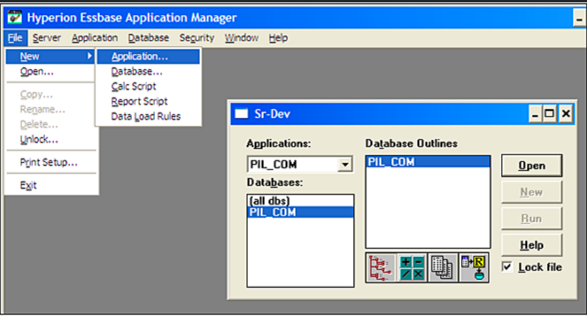 See how close “Delete” is to “Unlock”? In the past, Essbase outlines are exclusively locked during edits; they still are. And in the past, just as today, Essbase timed out quiescent sessions. And Yr. Obt. Svt. is at the best of times, impatient and clicks through confirmation messages just as fast as he possibly can. And, although you cannot see it from this screenshot, unlocking a database outline, deleting a database, and deleting an entire application were all cheek by jowl. What could possibly go wrong?

I was working with another consultant who was doing the domestic app while I did the international one. My database had a lock. I was impatient. I, without really looking decided I needed to unlock my outline right now. Instead I deleted the domestic app, two months into the project. Oops. This of course would be only a minor inconvenience as restoring the data was simple enough. It was those load rules, calc scripts, report scripts, etc. that were simply irreplaceable but that wasn’t a worry because of course the file objects on the Essbase server were of course backed up nightly. Or not.

As you may gather from being able to read this email, he didn’t kill me although I surely deserve it. Thanks, DaveF, I really did learn my lesson. Seriously, doing this has made me really cautious about repeating something like this. Experience is a cruel but thorough teacher.

How has the cloud changed things for me?

I am no longer an independent consultant – how does one geek afford the many products to learn, test, PoC, and even blog on? The answer is he can’t.

I switched technologies – 2016 and 2017 and arguably part of 2018 were times of much change in the Oracle EPM space. Many consulting companies, ones that I was certain would outlast me are – poof! – gone in mergers, acquisitions, or corporate suicide. I had a mortgage to pay and wasn’t interested in borrowing from my retirement fund so I looked round, thought an awful lot, bored every colleague and friend who I could get to answer the phone to hear me out, and left the Oracle space.

Ouch in so many ways.

But I’m back albeit in a different role and not solely in the Oracle space. I did miss it awfully and am so glad to reconnect with the people and technologies that have made up almost all of my so-called career.

The Oracle community and me

I knew Sweet Fanny Adams when I started with Essbase (remember the lineage: Arbor Software, Hyperion Solutions, and then Oracle). By the time Oracle bought Hyperion, I knew a little but not a lot. I went to ODTUG’s Kaleidoscope 2008 Essbase sessions and realized I knew just about nothing. Ever since then it’s been a mad race to keep up. Sometimes I think I’m doing okay and others I’m quite positive I’m hopelessly behind.

During my days of technical malaise, I know I can reach out to the seemingly endless sources of information that are publicly available: blogs, conference sessions, Oracle’s content, message boards – it goes on and on. As someone who was part of the Oracle space and then wasn’t and now is again, I can tell you that this openness isn’t something to take lightly. Seriously, cherish it.

I’ve tried to give back through blogs, presentations, meet-ups, user groups, and books. It’s the least I can do.

What feature I would love to see added

An ability to seamlessly blend relational data with Planning/Essbase – not as a load rule or FDMEE or Data Management or whatever source, but true, right there in the UI controlled tables as a place for user input. In fact, users wouldn’t know or care what tool or back end or whatever they use – it looks the same to them but gives we geek practitioners more options. That blending of relational and multidimensional data would just be awesome.

But proud? I suppose for me that has to be when I’ve the very best job I possibly could. And the only way I can know I’ve done that good job is to be invited back. Remember my horror story? I’ve been back to that client four times as an IC. That isn’t typical or at least isn’t for me. You can take that as a client that can’t learn from pain or perhaps that I fixed my mistake quickly or perhaps I’ve improved with experience. Dunno, but it’ll always be a point of pride with me that I built so many different apps over the years for the same group of application owners.

I’m pretty sure I’m no Oracle Groundbreaker, but I’m happy to give a shout out to those who are.

2 thoughts on “My take on OGB Appreciation Day: An Essbase Hacker’s POV”